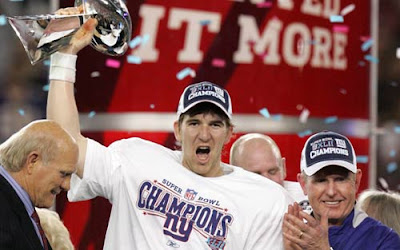 Photo courtesy AP/Newsday
Under normal circumstances, I would have rooted for the Giants; after the Bears and the Cardinals, they are my favorite team, and they have been since Fran Tarkenton went there.
However, the Patriots were going for perfection and history and all that, and I STILL believe that Bill Belichick deserves to be discussed in the same realm as Bill Walsh and Chuck Noll.  What he has done is remarkable, and he deserves accolades and a trip to Canton when it's all said and done.  And don't hand me any bullshit about "cheating"; we live in a world where Al Davis once coached, so Spygate ain't hittin' on nothin' with the Cracker.
All that having been said, the Giants flat out WHOOPED the Patriots on Sunday night, winning the war on BOTH sides of the line of scrimmage.   The Giant defense was in Tom Brady's face, ass and other regions up until the last New England TD drive, when they were clearly gassed.
Then, despite the fact that, until this season, Eli Manning had been a joke in the New York region, he stepped up and delivered the type of game-winning drive that Brady and his brother Peyton were better known for providing.  He capped the drive with a TD pass to the man whose injuries had kept him out of much of the Giants' season, Plaxico Burress.
Bravo to Eli, and to Tom Coughlin, who made the changes he had to make in style to keep his job, regaining his players' trust and support in the process.  Most of all, bravo to Steve Spagnolo, Giants DC, who came up with the plan to harass Brady and got his players to execute it to perfection.  Bravo to Justin Tuck, Osi Umenyiora, and last but not least, Michael Strahan, who finally gets a ring before his eventual induction in Canton.
I feel sad for Belichick, who made sure he hugged and congratulated Coughlin, as they had worked together under Bill Parcells with these Giants years ago.  I feel saddest of all for Randy Moss, who did everything the Patriots asked of him, shedding his clubhouse-cancer reputation in the process.
However, they will be back, rebuilt and ready for blood next year.  And as for the Giants, they've earned their parade in Manhattan on Tuesday.  Especially Eli Manning,  who is now the toast of New York, maybe even more than Derek Jeter!
Posted by Steve Steffens at 12:37 AM

I can't believe I bet on the Giants. Sometimes being an idiot pays! :-D