Mother of Mercy, is this the end of Broyles???? 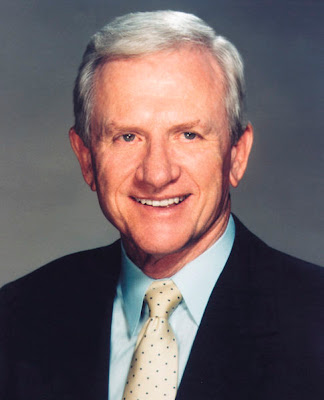 My friend Greg Miller says we should be queuing up THE END by The Doors, and he may be right.

Not age, not selling out for SEC $$$, not micromanaging the football program, not moving football games from Little Rock to Fayetteville could bring down Frank Broyles, but it appears that the Springdale group has.

According to the Arkansas Times Blog, John Franklin Broyles will announce tomorrow morning at 9:30 A.M. that he will retire as Athletic Director at the University of Arkansas, a position he has held since 1973, ending 50 years of service to that semi-distinguished institution.

In one sense, no one has done more, athletically, for that school than Frank Broyles. During his time there, every facility was upgraded or rebuilt. In every sport but football, he hired the right people to run the program and only checked on them to see that they had what they needed and that they did not violate NCAA rules. For that, he should be applauded and commended.

Ah, but there's the rub; he could never let go of the football program until he hired Houston Nutt. Then, when he SHOULD have stepped in to relieve Nutt of his duties, he refused, so now he walks the plank.

Well, let's wait a minute. The man has more money than God and an Augusta National membership to boot; he ain't hurtin' by a long shot. It's just that you wonder how someone who has had great power (more than anyone else in Arkansas over the past 30 years, except for somebody from Hope we call Bubba), and who was not afraid to wield that power, will adapt to not having that power.

For Frank's sake, I hope he doesn't lose his will to live, like Paul Bryant did, and I'm not kidding. This man has survived the loss of his wife and a couple of attempts to move him out before now, and kept right on going. It's going to be different sitting in his box now having to JUST sit there and watch.

In the long run, this had to be done; it's in the best interests of the University of Arkansas, its athletic department, and its fans, who have wondered why the hell we ever went into the Southeastern Conference in the first damn place.

Yes, I say we, as I have been, to use a John Brummett term, a Hogoholic since the age of 8. I had my heart broken twice by the mythic 1969 team that lost to Texas in the greatest college football game ever played (too bad, Husker fans, it's the TRUTH) and then was upset in the Sugar Bowl by Archie Manning and Ole Miss.

All of that, of course, was under the reign of Broyles as football coach, which he was at the start of his tenure as AD.

Yes, he leaves UAF with lots of money and great facilities, and for that we are thankful. However, as sad as it is to say, it's time for him to step back and enjoy what he has done in the remaining years he has left (he is 82) and allow us to applaud the entirety of his career, before he besmirches it more that he has already.
Posted by Steve Steffens at 2:48 PM