Merry Christmas from your Cracker, and read Charlie Pierce

We will all muddle through somehow, as I go through a wonderful Christmas, which will be even more wonderful when my Susan gets back from Jackson this afternoon.

Charlie Pierce speaks of Judy Garland, muddling through, and I believe, hope, which is what we all need.  Just remember, we can get through this, and we will endure.

Merry Christmas.
Posted by Steve Steffens at 10:41 AM No comments:

Carol Chumney is the Democratic nominee for AG 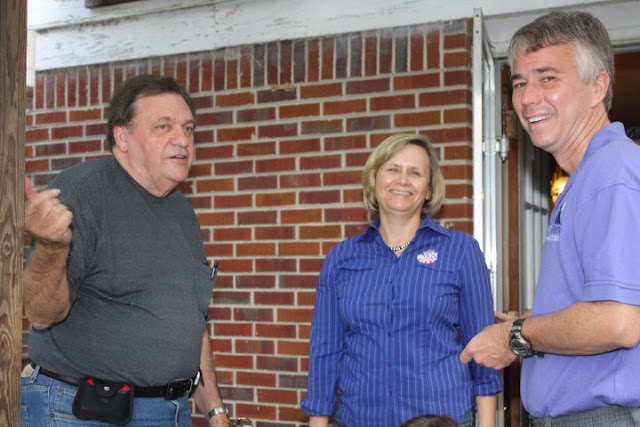 Courtesy Steve Mulroy; this picture of Carol with Jackson Baker and Steve Mulroy was taken on my back porch.

I have received texts confirming that Linda Nettles Harris and Glenn Wright have withdrawn their petitions for the Democratic primary for Attorney General, leaving Carol Chumney as our standard-bearer.  Now is the time to get behind Carol, who is running against interim Attorney General Amy Weirich, who was hand-picked by former AG Bill Gibbons.

Weirich, who is apparently too ashamed of the GOP to list on her signs that she is a Republican, is a career prosecutor.  The question that needs to be asked, however, is this: does a long list of prosecutions equal JUSTICE?  I am hoping that Carol makes JUSTICE FOR ALL a key part of her campaign.

Yes, of course I am supporting her, as should you, unless you LIKE the idea of an AG who only sees one side of an issue.
Posted by Steve Steffens at 1:46 PM No comments:

Carol's in for AG

Just sent to me in email:

CHUMNEY VOWS TO BRING EQUAL JUSTICE TO ALL AS D.A.

“At the local courthouse, the lady holding the scales of justice, is a symbol that in our country noone is above the law.”, says Chumney.  “I vow to protect our community from those who prey on the vulnerable, such as senior citizens who are scammed by con artists, children and youth from sexual predators, families from domestic abuse, workers who are not paid  equally for their work, and the trusting public that suffer abuses from even the most prominent professionals in our community—lawyers, doctors, and bankers . When I take office as D.A. noone will be above the law anymore.”

As D.A. , Chumney will enforce the highest standards of professionalism to those who serve the public, starting with that office.  The D.A. will serve the citizens equally and provide justice for all.

Chumney brings over 25 years of experience as an attorney in state and federal courts, along with 13 years of state legislative experience passing laws to protect citizens from criminals. She is the former President of the Memphis Federal Bar Association, served as an appointee to two Tennessee Supreme Court Commissions, and as an office of the House Judiciary and  Children & Family Affairs Committees.

During her career, Chumney has been recognized for her outstanding service by the local women’s bar, and earned statewide awards for her work to protect victims of domestic violence, and for consumer protection.
Posted by Steve Steffens at 4:28 PM No comments:

Well, Mr. Jackson, we have a small problem here...

Otis Jackson, currently on suspension from his job as General Sessions Court Clerk due to the fact that he was indicted back in July, has apparently decided that it would be an admission of guilt NOT to run for re-election to his position.  Toward that end, he has pulled and FILED a petition for re-election.

My question to Mr. Jackson would be this: Why are you not focusing on preparing for your defense in your trial?  In putting up a fight for re-election, are you not placing your liberty and the security of your family in jeopardy?  What on earth are you thinking?

Sir, you are entitled to the presumption of innocence until and unless you are proven guilty in a court of law. However, the perception that occurs when ANY office-holder is indicted renders moot their ability to perform their duties.  I am rooting for your acquittal, Mr. Jackson; if and when that day comes, you would then be welcomed back as a candidate.

Until that day comes, you should NOT be involved in any elective campaign; you need to think of your family, your workers in that office, and your obligation to the County of Shelby to remove that cloud which now hangs over you.  Then, and only then, should you consider seeking office again.

Toward that end, if you do not withdraw your petition prior to the end of the withdrawal deadline of December 15 at noon, I will then petition the Shelby County Democratic Party to decertify you as a candidate in the Democratic primary.  The potential that you could take the entire Democratic ticket down with you, should you be renominated in March, is too great.  You may not be thinking of your party, sir, but I am.

I do not take this action lightly; however, as a Shelby Countian, I am tired of the endless problems with office-holders, especially those who run under the Democratic banner.

Enough is enough, Mr. Jackson.  Put your liberty first, and withdraw your candidacy.
Posted by Steve Steffens at 8:01 PM 1 comment:

At the suggestion of our beloved NEWSCOMA, I have followed her to Tumblr.  No, this is not going away; in fact, I have something to say about Otis Jackson later tonight.

Tumblr is for people who are too ADHD for Twitter.  Need I say more? :-)

Watch this space later tonight, as long as Zippy doesn't pee in the floor!
Posted by Steve Steffens at 6:33 PM No comments:

It's VoteSteveRoss.com, the website for my friend and now County Commission Candidate Steve Ross, who is running as a Democrat to fill the seat of Mike Carpenter.  Carpenter resigned to take a job in Nashville.

Ross, for those of you who are regular readers here, is the author of the Vibinc blog, and a stellar observer of local policy and politics and would be a terrific Commissioner, and I will support him.  I hope that you will as well.
Posted by Steve Steffens at 8:18 AM No comments: