The sad descent of the NRA

As I have noted on countless occasions, I am a gun owner and I don't believe in gun confiscation.  Frankly, outside of maybe Rosie O'Donnell, I don't know anyone who does.  If the government even tried it, even if we had a GOP President, we would have an armed rebellion in this country.

I have been around hunting for most of my life.  I know hunters usually eat what they kill, and give away that which they cannot.  99% of them sit in a duck blind or a deer stand or walk a field, and do not visit any place that would  provide a "guaranteed kill", because that is the antithesis of sportsmanship.

When I was a child, my father, who was a part-time gunsmith when we lived in Northeast Arkansas in the late 1960s, was a member of the National Rifle Association, and subscribed to the AMERICAN RIFLEMAN magazine.  He hunted, and loaded his own ammunition.  Back then, the NRA would occasionally grumble about gun control laws, but they usually stuck to promoting gun safety and shooting sports, which is not a bad thing, I say, when done properly.

That was then, and this is now.

In their first major public statement since the tragedy in Newtown, CT a week ago, the NRA sent their leader and chief spokesman, Wayne LaPierre (who is a main reason my father grew to hate the NRA) out to speak on the matter.  Here is a transcript, and before I go any further, I would like you to stop and read this.

Go ahead, I can wait.

Denial's not just a river in Egypt , is it?

Everything is the problem except guns, and their easy access. Let us never forget that the National Rifle Association stands for nothing more than preserving unfettered access to guns to EVERYONE, regardless of age or mental illness.  They are NOT a gun rights organization, they are there to promote gun SALES.  To ANYONE, no matter what, even if it's someone who thinks the world will end and they are stocking up on guns and ammo to shoot anyone who may come near them.

By screaming that ANY attempt to restrict gun sales for ANY reason will lead to confiscation by ANY governmental or NON-governmental group that may pop into their heads, the NRA may be creating a self-fulfilling prophecy that eventually DOES lead to far more dramatic restrictions to gun ownership than any we have seen.

And that would not be a good thing, and it would be the fault of the NRA.  We NEED all loopholes closed regarding sales at gun shows (and KUDOS to my friend Councilor Myron Lowery, who is trying to get the gun show that is planned for the Agricenter cancelled) and there needs to be CLEAR definitions on what constitutes an assault weapon.  Like what former Senator Bob Kerrey said while running for re-election in NEBRASKA in 1994:

Exactly.  What the NRA is facing is a dose of unexpected reality.  The majority of Americans no longer believe that the Chinese are coming over the border to take our weapons.  If we have gun licensing and registration, it will not infringe upon my rights as a gun owner one bit.  Rights come with responsibilities, as EVERY conservative has ever told me, and our responsibilities as a society DEMAND that common-sense regulation of gun sales and ownership take place.

The great cartoonist Bill Day has generously allowed me to use this cartoon, and I think this sums things up rather well: 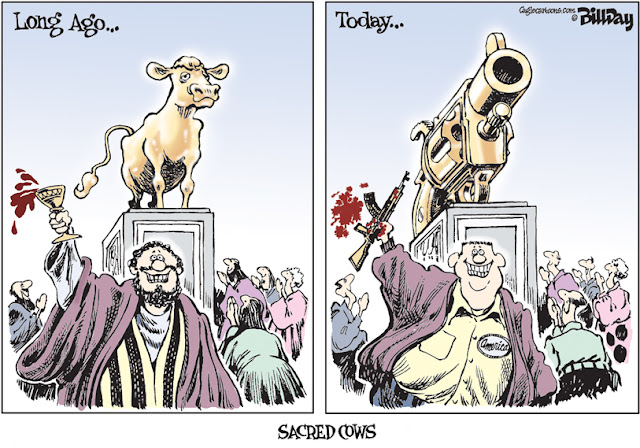 Posted by Steve Steffens at 7:21 AM No comments:

Nothing makes me feel more like Christmas than this.

It's not the newest version, but it's still the best:

Posted by Steve Steffens at 11:07 PM No comments:

It appears that GMail and Google is making their semi-annual attempt to force me into Google Groups.  I was restricted today when trying to send my first email to my list, which was a Scene column by Jonathan Meador.  Since the reasons that they give for slowing me down do not apply (no bouncebacks lately, among other things), I can only believe that they are coming at me because I send liberal columns in my posts.

I will let you know how this is going later.

Oh, and call the White House and tell them to KILL THIS DEAL.   We didn't work for Obama's re-election only to have him throw us all under the bus after the election.
Posted by Steve Steffens at 7:58 AM 3 comments:

And here we go again.

I presume that you are aware that some crazy fool walked into an elementary school in Newtown, CT today and shot 27 people, 18 of them being children.

I have been attacked on Twitter for responding too quickly and being disrespectful to the dead.  Really?  If we don't discuss this NOW, we will forget about it and another tragedy will occur, and then another.  If you want to prevent further tragedies, NOW is the time to think about it.  If you can't discuss this now, then WHEN?

The vast majority of gun owners (at least 99%, any way) are responsible citizens who would never do anything like this (and I am one of them).  However, the idea that we are powerless as a society to prevent mentally unstable people from owning weapons is ridiculous, and will at some point result in the loss of our rights to keep and bear arms.

Don't think so?  Let me ask you a question: if we can license people who own cars so that they may operate them, and require them to be familiar with their proper usage, why can we not do this for weapons, which are normally intentionally lethal?  We, as a society, refuse to allow people to drive if they insist on driving while impaired or are no longer able to properly operate their vehicles.  Why, then, can we not do the same thing for weapons?

While the licensing procedure doesn't eliminate DUIs or Grandpa driving onto the sidewalk and accidentally killing someone, it greatly reduces the occurrences.  There is no rational reason that we as a society cannot set up licensing requirements for weapons owners.  I, as a weapons owner since the age of ELEVEN, do not see how my right to possess a weapon would be infringed.

The National Rifle Association, dear readers, is NOT in business to protect the rights of weapons owners.  It is in the business to remove any and all obstacles to weapons manufacturers being able to sell their wares to everyone, no matter what age.  This is why they have gone far beyond what they once did, just to promote shooting sports and gun safety, which in and of itself is not a bad thing.  My father, who was a part-time gunsmith when we lived in Northeast Arkansas, was a member until he noticed how crazy they were getting.

We MUST, as a society, take more steps to insure that mentally ill people get the help they need, no matter the cost, and we must take steps to insure that they do NOT have access to weaponry.  While we will never completely eliminate this problem, there is no rational reason we cannot reduce the likelihood of re-occurrence.
Posted by Steve Steffens at 6:30 PM 1 comment:

We have a blogger that I didn't know about!

We welcome OFFENSIVE DEMOCRAT to our little blogosphere, written by our buddy at the TNDP, Brandon Puttbrese.  And really, aren't OFFENSIVE DEMOCRATS the best kind?? I certainly think so.  We are going to add him to THE ENDLESS BLOGROLL and I think you should add him to your RSS feeds.

Today, in particular, he has a lovely rant about Senator Brian Kelsey's veryclose friend, newly-elected Representative Jeremy Durham, who it appears had a seat drawn just for him!  It seems that Durham, representing Tennessee's most liberal county, Williamson (sarcasm should be duly noted here), thinks that the state's richest county can't afford TennCare for the poor saps who serve the people that live in their mansions in Franklin and Brentwood.

I urge you to read it, and I wonder how I missed OFFENSIVE DEMOCRAT for so long.  I won't make that mistake again, and neither should you!
Posted by Steve Steffens at 7:00 PM No comments:

West Tennessee fights back against Fincher!

This was passed to me, so I am passing on to you!

“Fincher and the Republican Party are heading this country right over the fiscal cliff,” explained McKenzie resident Alma Jones.

If Congressman Fincher and the Republican-dominated House of Representatives do not take action before the New Year then on January 1, 2013, taxes on all Americans will rise: more money will be withheld from every paycheck and the average Tennessee family – already hard-pinched in the current economic crisis – will pay more than $2000 additional taxes for the year.

Most economic experts agree that this massive tax increase for middle class and working class Americans will sink the country deeper into recession.

President Barack Obama has already said that he will sign a bill which retains the current tax structure for all income below $250,000 per year.  The Senate has already passed that bill.

But the Republican-dominated House of Representatives has refused to let that bill reach the House floor for a vote.  The Republicans are insisting that the tax rates for Americans earning over $250,000 per year not be raised.

“In other words,” said Jones, “the Republicans are using the threat of higher taxes for 98% of the American people as a bargaining chip to retain lower tax rates for their wealthy friends and contributors.”

“We’re going to tell Congressman Fincher that the citizens of this congressional district aren’t going to accept this.   We hope many Martin, Dresden, Union City and West Tennessee folks join us this Thursday at 3 pm in front of Congressman Fincher’s office in Martin  on Lindell between Main and University.”