Looking Across The River At A Memory 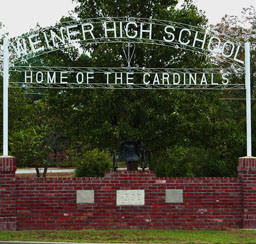 My grandfather graduated here.  My cousins on my mother's side graduated from here.  I attended Weiner Elementary School around the corner for three years, and to get there, I had to walk through the cemetery where my great-grandparents were buried, and where my parents and grandparents are now buried.  Needless to say, I have some history in Weiner, Arkansas, a mere 75 miles from my home, but light years away from my world now.

Weiner, because it has been supported by wealthy families connected to rice farming, has always been a successful school in terms of education, and in terms of basketball.  They were state runners-up the year before in moved there, people I went to school with played on state runner-up teams in 1977 and 1978, and I have to confess that I got choked up when they finally won the Class A state title in 2003.  My grandfather played there in the 20s, and one of my cousins played on the 1967 state runners-up.

So, as I have watched this district, which once consisted of Weiner, Waldenburg and Fisher in western Poinsett County, be forced to merge with neighboring Harrisburg, it has been tinged with sadness.  For now, the elementary and high school campuses in Weiner will remain, and I presume that the Cardinals will play in Guy French Gymnasium one more year.  I suspect, however, that before long, they will all go 15 miles away to school.

Oh, some of the townspeople have been fighting it with all their might, even going to some crazy extremes.  However, in the end, while the town population of 700 has not changed in over 40 years, the district shrunk below the minimum 350 students needed to stay independent.  So, for the first time, the Weiner schools are now part of the Harrisburg district.

I used to argue about consolidation with my grandfather, who used to argue against, noting that in Weiner that class sizes were small enough that every student could get the attention they needed and deserved, and he was right about that. Then, of course, he would note that if Weiner ever folded and there were no basketball team, the town would dry up and blow away, losing its identity.

However, being in a small district means that even a well-funded district like Weiner, they can't offer the wide variety of classes needed to compete for spots in good colleges and universities.  Of course, the great irony about this is that once Weiner children can get the broad-based education necessary to go to great schools, get their educations, get great jobs - which means they will leave and never come back, except to visit aging parents.

So it was with resignation and sadness that I read this beautiful piece in the Arkansas Times by Rick Fahr, a 1988 WHS graduate who is now the publisher of Conway's Log Cabin Democrat.  Yes, he is correct; the opportunities will explode for Weiner students, which is what they need and deserve.  Of course, this also means that the likelihood that they will bring what they have learned back home to keep the town alive shrinks, just like the district.  They will be just like Fahr, who found his fortune in Arkansas, but not in Weiner.

Is this, then, the fate of small town America?  Helping their children get the education they need to compete, only in so doing they assure their own demise?  It hurts to think about, I'll tell you that.
Posted by Steve Steffens at 10:23 PM

Google "Custer City, Oklahoma," put Panthers intead of Cardinals and now find it consolidated--"taken over" as the locals put it 10 years ago when I lived up the road a piece in the Big City of Thomas (1,250 versus 400)--and you will discover Weiner now. It casued a myriad of problems, but Custer had no choice given both the issues you raise with Weiner coupled with an Oklahoma Education reform bill known as "1017" (passed under GOP Gov's Henry Bellmon's leadership and he is widely-praised for having done so excpt by the Loons and Wingnuts), so within five years of the new law, Custer was forced to swallow its traditiuon and consolidate with the Hated Terriers up the road. It was very sad for the Custer folks and to my knowledge, they remain bitter about the whole business. At the same time, another Oklahoma town, that of Cyril, continues to be an ISD that barely meets the curriculum and population requirements, but has horribly inadequate class offerings (haven't had a Fine Arts program in decades, for example: just crank up the boom box at football halftimes) and graduates who are taught by certified "professionals" whose English is, well, not exactly Queen-like. Cyril, several years after I left, FINALLY agreed to consolidate with Cement ("See-miiint" as the locals say), but refuse to consider doing so the other two small locales of Sterling and Fletcher. Subsequently, Cyril and "See-miiiint" continue to field an 8-man football team (often bad, at least when I was there), but offer their children next to nothing in issues that make life worth living. That is the true sadness of which you speak.

Excellent points, sir. The identity gets wrapped up in the ball teams, and Weiner doesn't even have a football team.

The irony is that, once they merge, Weiner kids will get the opportunity to play high-school FB, which has never been available to them.