A brief interlude for biographical purposes

Our good friend Trace Sharp would every once in a while on her Newscoma blog have what she called Annoying Autobiographical Pauses where she talked about what had gone on in her personal life recently.  I am going to take one of those now.

A little over eleven years ago I started a temp job with Dell at their kiosk at Wolfchase.  It was selling computers and other Dell products through their website.  We were a display location for people to come and see the product and allow it to be demoed and ask questions before you buy.

The manager of the location was a guy named Ken Tabulog.  Ken and his wife Diane and their three childeren, Dallas, Austin, and Victoria (Vicki) (Yes, he is a Cowboys fan) grew to become very good friends of myself and Pam.

Ken helped me and Pam move before Jack was born.  I helped them move when they left Atoka adjacent for a house near the Quince YMCA.  They and their surrogate son, Nick who they all but adopted when he moved here from Hawaii, babysat Jack on several occasions when they moved in across from St Anne.

There's a picture I break out every once in a while to annoy her that is of her and a 20 month old Vicki at the wedding, Austin is in there, but he doesn't matter :-p.  Diane hates her hair in the picture. I and Pam always kinda treasure it because Pam's mother pointed at Vicki and said that she wanted one of those to Pam.

Now, Pam at this point had just turned 41.  Her mother was 80.  SHE HAD NEVER ONCE SAID ANYTHING ABOUT A GRANDKID.  Pam laughed about it, told me, and we laughed about it.  A week later, Steve asked me while we watched games up at Tracks if we were going to try to have kids.  I said those infamous words of, "If it happens, it happens."  Well, six weeks later it was conceived and it is currently in the other room playing X-Box while I write this before I go for a run in the 85 (soon to be 95) degree heat.

Last night, I went to a going away party for them at El Puerto on Highland.  They are leaving in a few days to move to Monroe, LA where Diane took a job earlier this year as a partner in a staffing firm there.  She previously worked at Vaco doing a similar job.  They expect this to be their last stop on their journey back to Hawaii where Ken was born and raised.

We left earlier than we wanted.  Pam and Jack were tired.  The party I'm told and seen went on to the wee hours of the morning.  We've drifted a little bit aways from each other over the years as you do when you get older and things (kids, work) get in the way, but we remained friends.  We will likely go down and see them, but it won't be on the more frequent basis that we used to see them.

All I can say is safe journey my friends.  Aloha and mahalo. 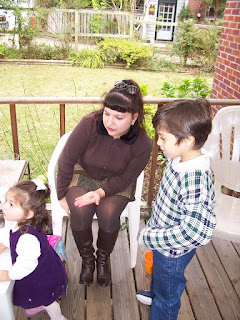