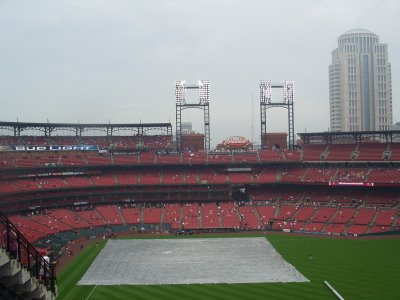 The view from the right-field stands. I was sitting in the section below the T in Bud Light. The BUD LIGHT area is the print-media press box, by the way. 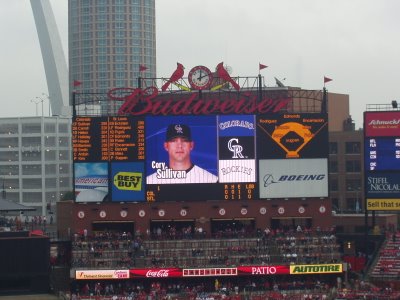 The scoreboard is massive; when you're in the park, you can't believe how big it is... 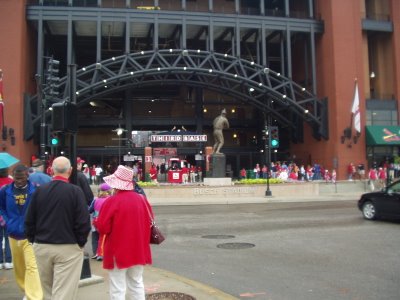 The main entrance, as 8th Street borders on the west. This is what you see when you come up to street level from MetroLink.

Remember when going to a Cardinal game was the best deal in the Majors? No more, my friends. The Cardinals now have the THIRD-HIGHEST average ticket prices in all of MLB, behind only the Red Sox at Fenway and the Cubs at Wrigley. Yes, that's right, it's CHEAPER, on average, to get a ticket to see the YANKEES than the Cardinals. My 3rd-deck seat (Infield Terrace Box, Section 352, FYI) cost $31 before the $3 fee.

By the way, I bought my ticket at Schnucks on Truse Parkway, across Poplar Avenue from Clark Tower; it's the only Schnucks in Memphis where you can get Cardinal tickets, and it's cheaper than buying online!

The beers are $7-$8, and even the Hardee's on the top deck (you read that right) charges $5 for a 1/3 pound cheeseburger. They WILL, however, allow you to bring a cooler into the park, as long as it's a SOFT cooler and you have no glass bottles or cans.

I can't afford to go more than once or twice a year at these prices, but if you love baseball, you should try to go at least once this year. I took the MetroLink in from Fairview Heights, IL, so I can't tell you how much parking costs. There are two garages close by, one off 8th Street near the park.

The MetroLink was a $3.50 roundtrip from the heights, which is between East St. Louis and Belleville off St. Clair Avenue. It's a good deal, and I've never had a problem; as I stayed in Collinsville, it was simple to use and allowed me to use I-255 to miss downtown St. Louis on the way back home.