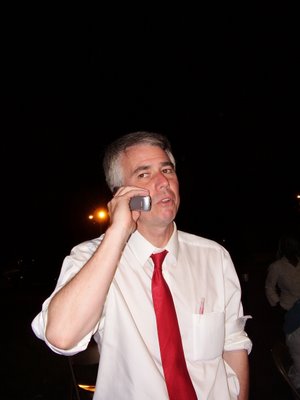 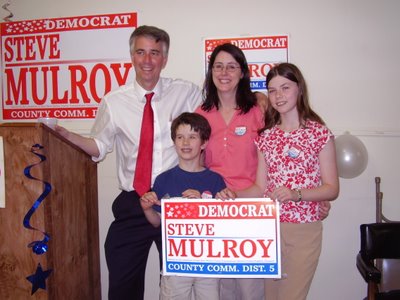 The Mulroy Family; photo above that is Mulroy receiving vote total updates from the Cracker.

Steve Mulroy took a slight 79-vote lead from early voting and turned it, with help from a wide group of Democrats, into an Election Day can o'whoop-ass, beating perennial candidate Joe Cooper 1568-892, with 137 votes left over for Sherman Kilimanjaro.

This gave Mulroy 60% overall, and a solid leap for the August general election, where he will face Gooper Jane Pierotti. Combined Democratic votes for District 5 easily surpassed combined Republican votes, giving Mulroy a leg up.

Other Cracker endorsees to win today were Mayor AC Wharton (who could have campaigned in drag and still won), Sondra Becton in the Probate Court Clerk's race, and unopposed primary candidates Coleman Thompson (Register), and Commissioner Deidre Malone.

In the Commission races, District 2 saw State Rep. Henri Brooks defeat Melvin Burgess II and Cracker endorsee Reginald Fentress to claim Position 2. In the widely-discussed Position 1 race, JW Gibson, the "former" Republican, defeated Walter Bailey and Cracker choice Darrick Harris to win Position 1. Note: I really do not see how they can kick him off the ballot now, it's too late. We need to get to know this guy REAL well, if you know what I mean, and I think you do.

OK, Sidney Chism, NOW you've been elected to the Commission from District 3, Position 2, and you stomped outgoing Commissioner Cleo Kirk with 84% of the vote. In the Position 1 race, James Harvey ran away from the field, which included Cracker pick Bob Hatton and the myth, the legend, Del Gill his ownself.

A mixed bag today for the Cracker, but the pictures up there say it all; the Commission is at hand, thanks to Steve Mulroy and his crew!

A.C. in drag... now that's an unexpected mental image. Do you think he would look better as a fem or as a butch? The world may never know.

Femme of course. What's the point of butch drag? Betcha he has some sexy legs..,